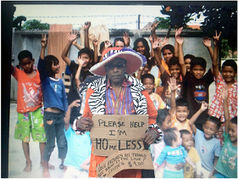 Archbishop Slappy is a cooperative effort between Donald Blackburn, Biscuit Dollapacca and Slappy the homeless guy. Don and Biscuit first met Slappy at the dumpster behind one of Philadelphia's finest Gentlemen's clubs. Don and Biscuit knew that they had to help this man. They realized that if they dressed him like a pimp, he could make more panhandling. Slappy was moved into Don's basement, cleaned up and became Archbishop Slappy the Homeless Pimp.