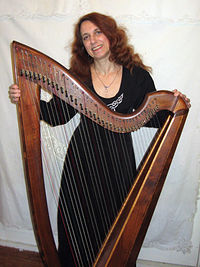 Ellen Tepper introduces herself with the line, "The Complete Harpist", and gives the following descriptive information:

Ellen Tepper, harpist and historian, brings life to 500 years of harp music.  Ellen was born in New York but spent most of her childhood in Vienna, Austria, where she began studying classical harp at the age of eight.  Her abiding interest in early music was inspired by a childhood spent exploring ruins in Europe and by her exposure to the multi-faceted cultural life of Vienna.  After returning to the United States, she continued her studies to earn a degree in Harp Performance from the Philadelphia College of Performing Arts (now The University of the Arts).

A versatile performer, Ellen has performed the traditional pedal harp repertoire but now focuses primarily on music composed before 1800, playing it on a variety of harps, including the medieval harp, the Irish wire strung harp, the Italian triple harp, the Renaissance bray harp, and the modern "Celtic" or lever harp. Ellen has performed with the Historical Harp Society, the American Harp Society, Early Music at the University of Pennsylvania, and with the iconic Philadelphia early music ensemble Piffarro. She also performs for "Music for All Seasons", and frequently appears as a soloist in the historic homes of the Delaware Valley.

Tepper is based in Glenside, Pennsylvania.