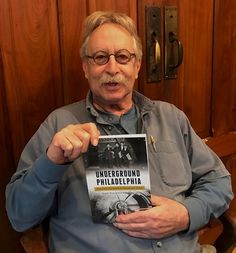 Joel Spivak is described by Hidden City Philadelphia as follows:

(See the full "What's Out There" article below)

Hope you're doing well. Like most people I haven't been doing so much in terms of public events over the past year. But here's a What's Joel Doing update anyway - this podcast (with images) took a look at some interesting aspects of my earlier life. http://joelspivak.com/doing.html

Also we freshened up the links on the homepage a little, including to the new page with the Levis 50-year club members on it http://joelspivak.com/Levis50.html

You can also click through from there to see some of my artworks or read about my community activities.

The South Street page is in process and we hope to have it mostly filled in by the end of March. Meanwhile, if you have South Street memories, share them in this survey -- we're collecting them. https://qluency.com/southstreet50/