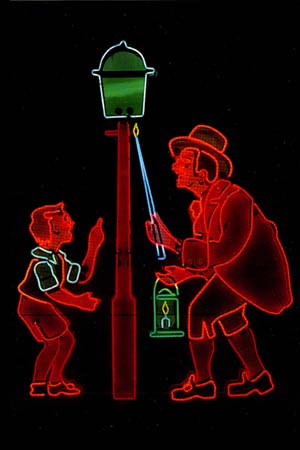 1950s Howard Johnson's Lamplighter, part of the collection of the Neon Museum of Philadelphia.

The Neon Museum of Philadelphia was established in 1983 but its foundation was laid in 1950s Philadelphia and the 1970s South.

Presiding over this lunacy was neon. Len and friends picked through neon boneyards and mounted dozens of alluring signs on the ceiling. The Gamery beat teaching undergrads and Len’s professor persona was left in the dust.

Davidson apprenticed with Jim Williams, an old-time sign man. “Neon is an absolute art,” Williams preached while rotating glass in the fires. A true believer, Davidson hit the road, scavenging Florida and New Orleans for relics and lore.

Returning to Philly in 1979 (with ’59 Chevy piled high with tubing), Davidson began to unearth his hometown’s magical neon history. He sought out remaining tube benders who described the city’s spectacular but vanishing neon heritage. He began to design signs and acquire neglected treasures on the street.

The die was cast: Davidson Neon Design would produce new neon and the Neon Museum of Philadelphia would preserve the old. Over 40 years the twin initiatives merged, and an amazing cast of characters helped create today’s NMOP.

Note:  The above descriptive information came from the museum's About page.