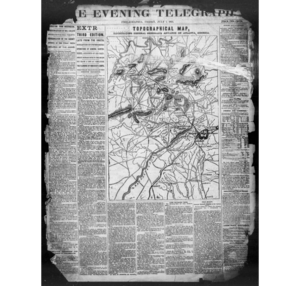 An 1864 front page of the Philadelphia Evening Telegraph.

The Philadelphia Evening Telegraph was a daily afternoon newspaper started on January 4, 1864, by brothers-in-law Charles Edward Warburton and James Barclay Harding to compete with the Philadelphia Daily Evening Bulletin, Philadelphia’s only afternoon newspaper at the time. They speculated, correctly, that the rapid growth in population and wealth in the area would support a second afternoon paper, and by the end of its first year the Telegraph went from four to eight pages; it ran daily except for Sundays. The Telegraph was an independent paper, Republican in political slant and supportive of the federal government.

The Telegraph was noted for its innovations. In August 1866, Warburton connected its offices with the Philadelphia headquarters of a political convention to found a party to support President Andrew Johnson, using the telegraph to transmit the proceedings to the public. One of the paper’s major innovations was to present editorials from the leading newspapers from New York and other cities in a feature called “Spirit of the Press.” By the 1870s, the Telegraph was running six columns of editorials from other U.S. and European newspapers.

Note:  The above description came from the paper's archive page.