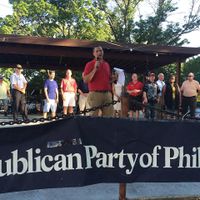 Chairman Joe DeFelice speaking in front of a slate of candidates at a Philadelphia Republican City Committee event.

You Get It. Now Let's Make a Difference!

The Republican Party is the Grand Opportunity Party--we are the party of a stronger and freer America! We work to promote the ideals that our country and party were founded upon: freedom, liberty, personal responsibility, and accountability. As Republicans, we fight to: