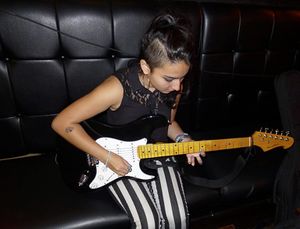 A Share The Spotlight musician practices a rock riff.

Share the Spotlight is a tuition-free summer music program in New York City and Philadelphia for musicians in 6th – 12th grade. We aim to build character, leadership and scholarship through performance. Students rehearse all summer in small ensembles based around rock, funk, soul, and R & B. At the end of the summer, the ensembles perform in a real rock venue.

Ever since I can remember, I have loved to sing. According to my family, I sang before I could talk. But as I grew up, I became increasingly self-conscious and refused to sing (anywhere except the shower) for years. At 15, I started playing guitar at a performance-based music program called School of Rock, which became a second home. After a year surrounded by teachers who supported me and friends who constantly pushed themselves beyond their musical comfort zones, I finally worked up the courage to sing in front of an audience. After belting my heart out at one of New York City’s storied venues, The Bitter End, I felt a sense of pride I had never experienced before. I became more confident in every aspect of life; from raising my hand more often in class to taking leadership opportunities as they arose (for example, spoiler alert: starting this program!).

However, it dawned on me that experiences like this are rare and expensive, making them inaccessible to most passionate young musicians. I co-founded Share the Spotlight in 2014 with our Music Director, Darren Musatto, to bring the opportunity to learn music and perform to students from every background. Our fundamental belief is that every young adult deserves the opportunity to be part of a supportive community where they can explore their passion and excel. Share the Spotlight not only aims to teach music, but to inspire each of our students to see the rock star in him or herself and develop the confidence to reach his or her potential.