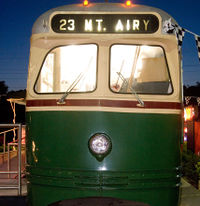 Editor's Note: As of July 2021, the Trolley Car Diner has been permanently closed and razed. The following information is now history:

As a locally owned business, Trolley Car Diner aims to purchase ingredients from local merchants. From aromatic LaColumbe Coffee to chewy Le Bus Breads to creamy Nelson’s Ice Cream, our menu is chock-full of local treasures, including lip-smacking produce from a farm in Lancaster County and even right from our owners’ garden. The Trolley Car that Could

Ken and Judy Weinstein, and former partners, Bob & Nancy Elfant, always knew they wanted to open a family-friendly diner. But never knew they’d have to mount it on a truck and drive it 100 miles!
Whoever had the original idea of tracking down an old diner, no one remembers. But they have fond memories of traipsing all over creation together in the late 90s in search of one, until finding the perfect 1952 model in Wilkes Barre, Pennsylvania in 1999.
But, boy, did she need a good cleaning! And that’s exactly what she received. Lovingly renovated and restored, our silver gal rolled into her current location at 7619 Germantown Avenue, Mount Airy, in April 2000 escorted by two state police cars and two TV station helicopters, and greeted by “ground media” and more than 200 local residents.
The largest animated neon sign in the Philadelphia area was installed on her roof, a glittering invitation to curious passers-by and nostalgic noshers.
But she was missing something a lady can’t do without. Namely, a name. In October 2000, a local “Name the Diner” competition was held. After receiving nearly 1,000 submissions, a clear favorite emerged: The Trolley Car Diner, named after the Route 23 trolley car, which ran along Germantown Avenue for many years.
In July, 2003, the diner got hitched. To a 1948 trolley car, which proudly stands beside her, dispensing delicious ice cream and water ice.