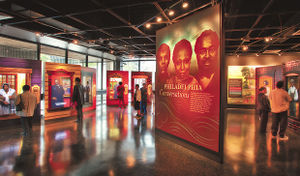 A permanent exhibit of the African American Museum in Philadelphia.

Founded in 1976 in celebration of the nation's Bicentennial, the African American Museum in Philadelphia (AAMP) is the first institution funded and built by a major municipality to preserve, interpret and exhibit the heritage of African Americans. Throughout its evolution, the museum has objectively interpreted and presented the achievements and aspirations of African Americans from pre-colonial times to the current day.

The museum is committed to telling the story of African Americans in all its permutations: family life, the Civil Rights movement, arts and entertainment, sports, medicine, architecture, politics, religion, law and technology. The AAMP currently houses four galleries and an auditorium, each of which offer exhibitions anchored by one of our three dominant themes: the African Diaspora, the Philadelphia Story, and the Contemporary Narrative.

Note:  The above descriptive information came from the museum's About AAMP page.