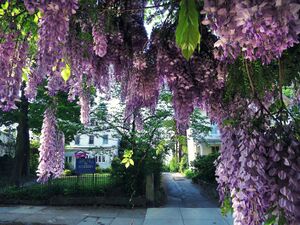 Old Academy Players was formed in 1923 as the Moment Musical Club by 19 members of the Falls Methodist Church. Their first production was a musical called The Minister’s Wife’s New Bonnet. It was a rousing success.

The club decided to do more shows under their own independent auspices, and gave theatrical productions; did charitable work and provided social fellowship for its members. However, the group had no permanent home. It rehearsed in local homes and barns and rented facilities for its performances. It staged plays at Palestine Hall, The YWCA of Germantown, the Germantown Women’s Club and any other rental space that was available and affordable.

Having acquired the use of the Old Academy in 1932, the members started repairing the building and converting it to a theater. For seating, chairs were borrowed from the next door Young Men’s Association. The stage was at floor level and all entrances and exits had to be made through the front door and down the aisle. They initiated a custom still followed today, of providing free refreshments at intermission.

In 1941, through the generosity of John Hohenadle, a local brewer, and John B. Kelly, a much needed addition to the rear of the building was constructed. Soon after that, a young girl named Grace Kelly made her debut on our stage. While finances have always been a worry, improvements have been steadily made thanks to the sweat and love of our members, and the generosity of our patrons.

Note:  The above descriptive information came from the organization's Our History page.