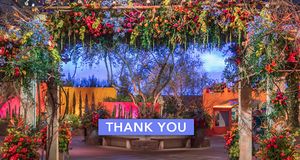 The PHS Philadelphia Flower Show, a program of the Pennsylvania Horticultural Society, is an annual event that was first held in 1829 in an 82-by-69-foot building called Masonic Hall on Chestnut Street. Twenty-five PHS members showed off their horticultural treasures, including a variety of exotic and native plants.

In 1966, the Show was presented in the lower level of the Civic Center and, in 1968, the PHS became the official producer. The Flower Show remained in the Civic Center until 1996, when it moved to its current location at the Pennsylvania Convention Center. In this Center City venue, the Show encompasses 33 indoor acres, with exhibit space taking up 10 acres of the main exhibit hall. The Show now entertains more than 265,000 people each year.