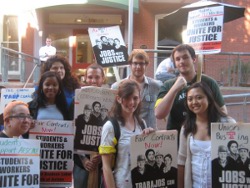 Philadelphia Area Jobs with Justice is a coalition of labor unions and student, community, and faith groups united in our shared work fighting for the rights of all working people--in the workplace, in our neighborhoods, in the media, and on the picket line. We work together in solidarity and in reciprocity, showing our support for each others' struggles.

Philadelphia JwJ was founded in 1999 in order to link unaffiliated activists with labor unions and social justice organizations in solidarity to win victories through the media, on the ground, in picket lines, and at protests. Since then, we have engaged in and won local and national campaigns demanding the fair treatment of workers from some of the country's most notoriously anti-worker corporations--including Verizon, Comcast, Walmart, and Sunoco. We have also worked on national, state, and city levels as members of the National Jobs with Justice network to fight for immigrants' rights, single-payer healthcare, workers' rights to organize, and more.

Note:  The above descriptive information came from the coalition's Who We Are page and its About Philadelphia Jobs with Justice page.