Pocono Secrets - Lenni Lenape The True People Of The Poconos 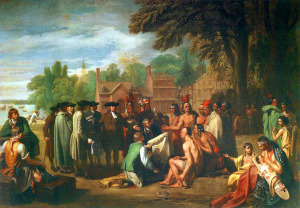 Long before Europeans, the Lenni Lena’pe called this area home. These Native Americans were the first inhabitants of the Pocono Mountains, having settled in the area over 10,000 year ago. Lena’pe is pronounced “Leh-NAH-pay” and it means “the people.” Sometimes you will see this name spelled Lenape, Lenápe or Lena’pi. The tribe is also known as the Lenni Lena’pe which translates to “true people” or the Delaware Indians after the Delaware River – The River of Human Beings, which runs through Lenni Lena’pe territory. The word Pocono in the native Lena’pe tongue means “a river between two mountains.” The Lena’pe did not have a written language; their history was passed from generation to generation by storytellers.

Note:  The subject of this page is a blog post from the Pocono Secrets website. The above information is an excerpt.