Second Bank of the United States 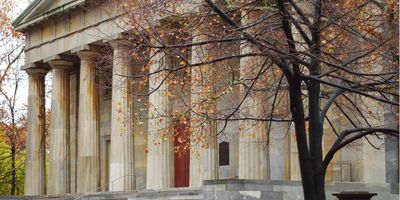 The Second Bank of the United States seen in late autumn.

The Portrait Gallery in the Second Bank of the United States, located on Chestnut Street, between 4th and 5th Street, houses the "People of Independence" exhibit. This exhibit includes a permanent collection of over 150 portraits of 18th and 19th century political leaders, military officers, explorers and scientists, including many by noted artist Charles Willson Peale. The building itself once served as a financial hub for the nation as home to the Second Bank of the U.S.

More than 100 portraits by painter Charles Willson Peale form the core of the portrait collection. During the late 18th and early 19th centuries, Peale asked those "worthy Personages" who exhibited the republican virtues of public-spiritedness, self-sacrifice, and civic virtue to sit for him.

The building itself is a work of art. Designed by architect William Strickland and built between 1819 and 1824, the Second Bank is a fine example of Greek Revival architecture.

Chartered by Congress in 1816, the Second Bank played a pivotal role in the "bank wars," which pitted President Andrew Jackson against powerful bank president Nicholas Biddle.

Note:  The above descriptive information came from the place's National Park Service page.