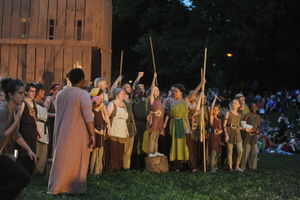 Scene from a Shakespeare in Clark Park production.

Celebrating Free Shakespeare in One of Philadelphia's Most Beautiful Parks

"Clark Park is not just a venue, but a real place, where a perfectly shaped, immense tree provides a set of real theatricality. The actors come down the hill into their next scene, and darkness falls just as the plot turns grim. The company has cobbled together, with borrowed footlights and generosity of talent, a real treat for a summer evening."

Note:  The above descriptive information came from the organization's About SCP page.