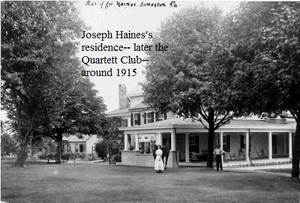 A historical photo from the collection of the Somerton Civic Association.

The Somerton Civic Association is a neighborhood civic organization. Its board and members consist exclusively of volunteers. They reside in Somerton. Members meet once a month between September and June, with further special meetings held as necessary. The meetings begin at 7:00 PM on the second Tuesday of the month. The Walker Lodge of the I.O.O.F. kindly allows the Civic to meet at its building, which is located at 1290 Southampton Road in Somerton.

The Civic's purpose as expressed in its governing documents is to “uphold the common good and improve the quality of life of the people of Somerton by means that may include charitable giving and service, education, beautification, public discussion of matters of community importance, protection of public health, welfare, safety, and morals, community organization, cooperation, and development, and advocacy on behalf of Somerton and its people.”

At Civic meetings, members discuss events of importance to Somerton. The Civic serves as a Registered Community Organization for Somerton pursuant to the City's Zoning Code, so its members are often asked to consider zoning variances, and they take an active interest in development and land use in the community. Speakers are frequently invited to Civic meetings. Members often bring problems in the neighborhood to the attention of elected officials or their staff members who regularly attend Civic meetings, or to the police, who conduct the monthly meeting of Police Service Area 3 of the 7th Police District during the Civic meeting. The Civic's board meets prior to member meetings. The board and members also work outside the context of meetings to serve the purposes of the organization.

The Somerton Civic Association is more than 70 years old, and the neighborhood's residents organized to advocate for Somerton long before that. In 1975, the Civic became a nonprofit corporation.

Note:  The above descriptive information came from the organization's About page.