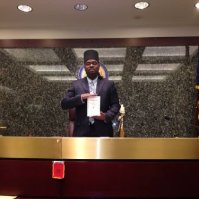 In 2006 Chaplain El opened the Moorish International Mission which provided emergency-housing, and social programs to Mali-Americans and other nationals from various West-African countries that domicile in America. That same year he began offering after-school and Summer camps to students at University City High School, and The New Africa Center (workshops were funded by The University of Pennsylvania’s Office of Government and Community Affairs).

In 2007 he became a registered clergy of the Philadelphia Mayor’s Office of Faith Based Initiatives. Because of his motivating lectures and workshops, Chaplain El has served as a keynote speaker at various houses of worship including Enon Tabernacle Baptist Church, Holy Redeemer Church and Zion Baptist Church; as he continues to provide a universal message of love, faith, and self-determination.

Since 2012 Chaplain El is also serving as a sales consultant for Amexum United Alliance (Community Development Entity) which provides super-low interest loans from $5k up to $15M (from the United States Treasury) to persons and organizations that prove their sustainability and viability to create new jobs in the low-income areas of the United States of America.

On April 4th, 2013 C.E. Chaplain El and birthed the International Interfaith Court which is a Faith-Based Family Court providing Pastoral Mediation; Chaplaincy Services; Peer-Specialist support; and other services to Parishioners in the various Faiths & Religions.