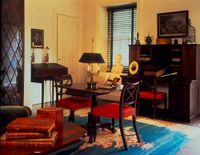 Cliveden introduces itself with the line, "Know it. Feel it. Share it," and gives the following descriptive information:

Cliveden, one of America’s most well-preserved historic sites, is located 6 miles from Center City Philadelphia in Historic Germantown. Explore what America is through the stories of Cliveden’s people: be they revolutionaries, inhabitants, or enslaved workers; Cliveden’s architecture: the 1767 building contains stellar furniture and decorative art and remains one of the nation’s best-documented and least-altered colonial houses; and Cliveden’s sense of place: located in America’s most historic neighborhood, Cliveden benefits from centuries of dedicated preservation efforts. Well-known as the scene of a Revolutionary War battle, Cliveden’s story spans four centuries of American history. The men, women, and children connected to this site provoke multiple ways to examine what being an American can mean. A day in the life of Cliveden involves both the War for Independence and the Struggle for Freedom, along with the ongoing preservation and detective work that ensure Cliveden will continue to provide meaning for future generations. Cliveden’s house and grounds tell all these stories together—the Battle of Germantown, the world of the Chew family, and struggle for human rights in America— the story of Cliveden is the story of America.

Cliveden’s Carriage House, originally built in 1767 and rebuilt after a fire in 1970, now features Emancipating Cliveden, a film showcasing the ongoing process of preserving and interpreting the history of the site. Featuring the talented voices of local celebrities, Chew family descendants, and members of the Germantown community, Emancipating Cliveden reflects how the historic house has become a community institution vital to understanding what freedom really means.

The exhibit Life, Liberty and the Pursuit of Happiness? orients visitors to the history of Cliveden. The exhibition highlights the contradictions and conflicts inherent in American history, and relates these issues to life at Cliveden.