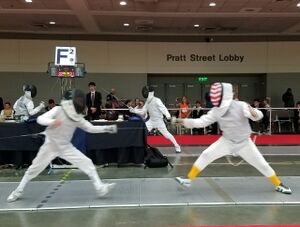 The Fencing Academy of Philadelphia in competitive action.

Beginner to World Champion Since 1989

The Fencing Academy of Philadelphia was founded in 1989 by Mark and Lara Masters. As accomplished practitioners of this unique and classic combat art, Mark and Lara realized that in fencing and fencers are much more than the physical attributes of speed, power, strength, balance, agility and endurance. Mark and Lara’s approach to fencing and training emphasizes the enhancement of mental skill:

Under their guidance, many successful fencers develop these skills during realistic training which prepares them for the pressures of competition.