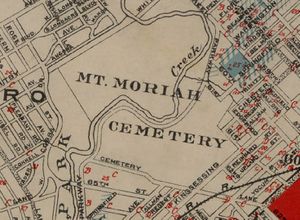 Part of a 1910 map owned by Friends of Mount Moriah Cemetery.

For many years before its closure, the cemetery had not been well cared for. Since 2011, the Friends of Mount Moriah Cemetery have worked to restore the cemetery. Volunteers began by clearing debris (including abandoned cars, tires, trash, etc.) and brush in overgrown sections, working inward from the entrances on either side. As of 2019, nearly 50% of the cemetery has been opened up to allow visitors to safely enter these sections.

In March of 2011, the City was made aware through news reports and citizen phone calls that Mount Moriah had ended its business operations. To our knowledge, no one from the Association informed the State, the City or the funeral directors that had worked with the cemetery of its intent to close.

Mount Moriah Cemetery is an historic burial ground incorporated by an Act of the State Legislature in 1855, one of several rural cemeteries developed in Philadelphia between 1845 and 1860. The cemetery originally consisted of 54 acres. While reports indicate that the cemetery is 380 acres, a review of real estate records indicates that it is approximately 200 acres. Philadelphia and Yeadon share equal shares of the cemetery, which spans Cobbs Creek.

Notes:  The above descriptive information came from the organization's History page. The Philadelphia portion of the cemetery is located in an unnamed area of Southwest Philadelphia between Elmwood and Kingsessing.