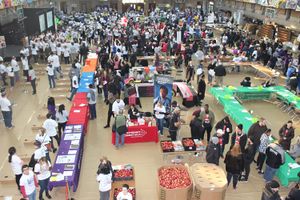 The scene at Girard College on a Greater Philadelphia Martin Luther King Day of Service.

In 2019, over 150,000 volunteers served in some 1,800 projects in the 24th annual Greater Philadelphia Martin Luther King, Jr. Day of Service, the largest King Day event in the nation. The King Day of Service evolved from a discussion in 1988 with former Pennsylvania U.S. Senator Harris Wofford. As a U.S. Senator, Wofford co-authored federal legislation with Atlanta Congressman John Lewis, both close friends and colleagues of Dr. King during the Civil Rights Movement. President Bill Clinton signed the King Holiday and Service Act into law on August 23, 1994.

The national King Day of Service started in Philadelphia as a small project in 1996 with 1,000 volunteers. It has become a fast-growing nationwide movement that has worked to break down barriers, form ongoing partnerships, and foster understanding about the legacy of Dr. King, particularly among young people.

Since 1996, over 1,000,000 volunteers across our region have celebrated Dr. King’s legacy by turning their community concerns into volunteer service and ongoing citizen action on King Day and beyond.

Note:  The above descriptive information came from the organization's About the Greater Philadelphia Martin Luther King Day of Service page.