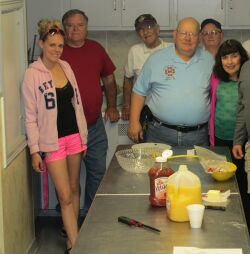 The Hattal-Taylor VFW Post 333 was created to honor soldiers who fought in the Spanish-American War and World War I. The U.S. Veterans of Foreign Wars granted the founding members of the Hattal-Taylor Post, located at Lyceum and Pechin, a certified charter in February 1920.

The post has added tributes to service men and women who fought in subsequent U.S. military campaigns over the decades. Monuments paying homage to fallen veterans of WW I, WW II, Korean, and the Vietnam War are on reverent display on the front lawn.

The Post was named after two local U.S. soldiers, Pvts. Clarence Hattal and William Taylor, who both died fighting in the Marne on the Western Front, in France during 1918. Despite heavy casualties, the relentless advance of Allied forces in the 2nd Battle of the Marne led to the culmination of hostilities in Europe and the eventual signing of the Armistice a short time later. The remains of Clarence Hattal are buried in the American cemetery in Oise-Aisne, France.

In addition to providing a meeting area where community veterans can hold scheduled get-togethers, the building also serves as a museum of war artifacts, some dating back to the Civil War. The upper floors contain a myriad of memorabilia ranging from military hardware, uniforms, posters, medals, books, magazines, and the personal effects of soldiers that cover the gamut of collected souvenirs that have been donated over the past century.

The post's rank and file are dedicated patriots and people who care deeply about our community's roots, and always willing to give back to help a cause whenever the opportunity presents itself.

Note:  The above descriptive information came from the Montgomery News article below.