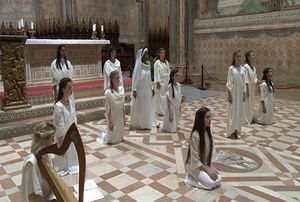 International Opera Theater (IOT) is a non-profit organization based both in Philadelphia and Italy. Founded in 2003, the company is dedicated to the transformative power of spontaneity driven art, specifically in opera and musical theater, taking into consideration in its approach the fundamentals of commedia dell’arte and the principles of complexity, swarm and emergence theories. As concentric ambassador to Italy and the US, IOT draws from both heritages to create contemporary world premiere operas that link the Italian lyric tradition with the innovative spirit of modern America.

During its 10 year activity, IOT has commissioned 10 original operas as well as other multicultural works, bringing together artists from more than 36 different countries and collaborating with some of the finest artistic organizations in the world including The Philadelphia Orchestra, The International Festival of Culture in Bergamo, The Smithsonian Institution in Washington, The Museum of Modern Art in New York,The American Composers Forum, The Association for the Highest Level of Musical Perfection in Saluzzo and more. Shaping and redefining a new field of interdisciplinary art, the work of IOT exemplifies the virtues of participation, dialogue and respect present in community building and essential in our globally developing world.

Committed to a sustainable model, IOT musical and stage directors work concurrently through an intuitive, movement based system to realize a premiere, which often takes years, in less than one month. Costumes and sets are primarily fabricated in Philadelphia under the guidance of Mi-Kyoung Lee, internationally renowned South Korean maker, head of fiber arts at the University of the Arts. 75% remainder fabrics and mundane objects such as plastic bags, pipe cleaners, paper towels, tissue paper, woven plastic vegetable covers, water bottles, duct tape, plastic fencing, etc. are transformed into objet d’art under the hands of Mi-Kyoung and her UArts assistants.

At the heart of the IOT mission is facilitation of self discovery and nonverbal intercultural communication, provoking the training of a new generation of operatic artist through imagination driven productions, as well as master classes, interactive auditions and international competitions which bring artists from throughout the world to Italy and from Italy and beyond to Philadelphia.