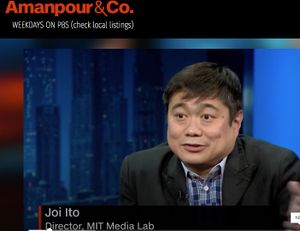 Joichi "Joi" Ito (伊藤 穰一 Itō Jōichi, born June 19, 1966) is a Japanese activist, entrepreneur, venture capitalist, Director of the MIT Media Lab, a Professor of the Practice of Media Arts and Sciences at MIT and a Visiting Professor of Law from Practice at the Harvard Law School. (MORE From Wikipedia)

I met Joi Ito in April of 1985 at "The First Intersystem Electronic Networking Symposim" held in a loft in Greenwich Village, New York City. The event was dubbed "Intersystem" because, at that point, computer facilities were isolated installations serving government, industry and universities. To use these services, one had to dial into a local number to something called "Telnet" using a computer equipped with a 300 baud modem, and then enter an address for the computer you wanted to contact. Everything was just text, there were no pictures or graphics.

One of the highlights of the Symposium for me was a demonstration by the 19 year old Joi Ito of his knowledge of international computer networks. With a cadre of adults (I was 38) looking over his shoulder, Joi gave a running monologue as he made connections to computer systems in Japan and other overseas countries. I believe that, at that time, he was involved in multi-player games with other young people from around the world. It took the Internet 10 more years to become popular enough that I was able to get involved with teaching how to use the text-based Internet through a local Philadelphia project called LibertyNet. --Stan