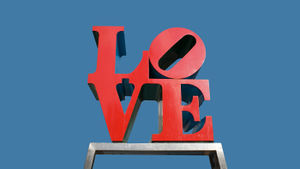 The statue for which JFK Plaza is nicknamed "LOVE Park".

Located near City Hall, the park serves as the grand entrance to the Benjamin Franklin Parkway. The plaza was designed by famed city planner Edmond Bacon, father of actor Kevin Bacon, and originally constructed over an underground parking garage in 1965. The plaza expanded in 1969 with the addition of beautifully curved granite steps and a majestic fountain.

The plaza gets its nickname from Robert Indiana’s LOVE statue, which was first placed there for the United States Bicentennial in 1976, only to be removed two years later. Due to its immense popularity, the sculpture was purchased by the Chairman of the Philadelphia Art Commission, F. Eugene Dixon, Jr., and permanently returned to the plaza.

Note:  The above descriptive information came from Visit Philadelphia.