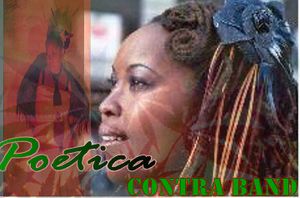 Legend of Poetica was described by the Black Star News as follows:

Forced to become a street performer by the age of four, Philadelphia native Poetica, a.k.a Natalie Natema, always knew how to please a crowd as she was coaxed to earn a living as a puppeteer on the streets of Philly. At 14, she was already a triple threat studying theater, music and visual arts at the local Creative and Performing Arts High School, but it was away from school grounds where she received an understanding of how art and entertainment fit within the lives of black people. As a spoken word linguist, she helped form the United Brown Poets, a group of teens that performed their own poetry pieces in various locations in Philly. In no time, the streets began to buzz of her talents so much that she was asked to open up for “The Roots” label signing party, with MCA, held at the Trocadero in Philadelphia. She then recognized her extenuating talent and wanted to perform more. Although she went on to study Film and Photography at the University of the Arts she says she kept being pulled in the direction of live performance by hosting open mic nights at popular lounges in PA, lending her voice to drops on the radio and organizing a group called Sista which showcased females in the performing arts. She took the balance of her student loan money and rented a venue with equipment, lighting, and sound. Sista in Support of the Million Woman March had a large turnout, featuring poetry, a fashion show, an African dance troupe and a slew of R&B artists including Jill Scott prior to her record deal.