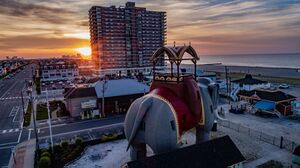 Lucy The Elephant at sunrise.

Lucy the Elephant is a unique architectural folly that has been part of Margate since its earliest days. Lucy was built in 1881 as a spectacle to attract prospective real estate buyers to Margate (then known as South Atlantic City). Visitors arrived by the newly constructed railroad, which stopped right beside Lucy. Lucy continued in use as a spectacle and tourist attraction well into the twentieth century, but the harsh marine environment and deferred maintenance eventually took a toll.

By 1969, the structure was nearly derelict and the owners of the property on which it stood had sold the land to developers. The elephant was slated for demolition. In a volunteer effort of heroic proportions, The Save Lucy Committee (SLC) raised the funds to move the elephant to a City owned property a few blocks away and to restore it. By 1974, the exterior and “super structure” of the elephant had been restored and Lucy was once again opened to the public for the first time in 12 years. The Committee also ran a small gift shop out of a small, one room train station (circa 1881) that had been moved along with Lucy from the original site. The gift shop and ticket sales for tours provided funds to support the restoration.

In 1976, the SLC, spearheaded by co-founder and President, Josephine L. Harron, lobbied the federal government to designate Lucy as a National Historic Landmark. In a ceremony during our Nation’s Bi-Centennial, the United State National Park Service, a branch of the Department of the Interior, bestowed the honor upon Lucy. On that day, she joined the ranks of the Statue of Liberty, Hoover Dam, Mt. Rushmore and other Landmarks that make up the fabric of our American History.

Note:  The above descriptive information came from the organization's About Lucy page.