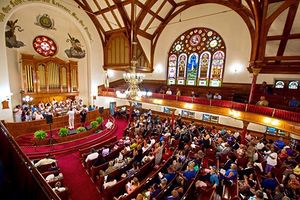 Established in the crucible of the American revolutionary era, Mother Bethel African Methodist Episcopal Church is recognized as the genesis of black religious organizing spirit. The church is mother church of the African Methodist Episcopal denomination, formed in 1816. Located at Sixth and Lombard Streets in Philadelphia’s Society Hill neighborhood, the church sits on the oldest continuously black-owned parcel of land in the country. Mother Bethel was founded by Richard Allen, a Delaware-born former slave who purchased his own freedom in 1783 and began preaching the gospel in Delaware, Maryland, New Jersey, and Pennsylvania.

Note:  The above descriptive information came from the Encyclopedia of Greater Philadelphia.