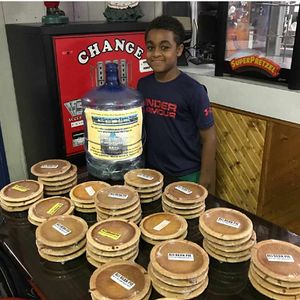 Muslims 4 Humanity caught in the act of spreading bean-pie deliciousness.

The M4H movement started like most other social movements; with a few courageous people coming together to meet about the problems that plague their community. The first 4 members began in 2014 by having community meetings in the local masjid to talk about how they could improve the surrounding conditions, focusing their efforts on and around the 60th St. corridor. As time went on, they began to educate themselves on the dense political environment within Philadelphia, and they slowly began to see the direct relationship between the various happenings within City Hall and the constitution of the community. With Cobbs Creek area being located virtually at the edge of the city, they felt as though it had almost been forgotten and that necessary action wasn’t being taken to improve the livelihood of its inhabitants. They came to the conclusion that it was time to create an organization that truly addressed the needs of the community. And so M4H was established in an effort to improve the lives of the people who call this city home. M4H has existed almost 3 years officially as a state recognized organization, and approximately 2 years as an official charitable org.

Note:  The above descriptive information came from the organization's Who We Are page.