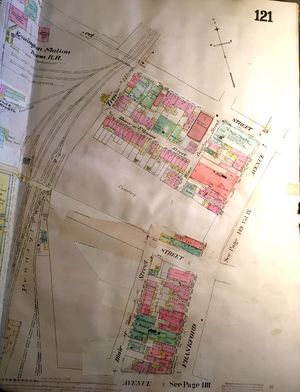 The Mutual Burial Ground of Kensington, a hidden historic site, is described for Wikidelphia by local historian Kenneth Milano:

The Mutual Burial Ground of Kensington was a beneficial society type cemetery. This non-religious type of cemeteries first began to appear in the 1820s. The residents of Mutual Burial of Kensington tended to be mostly German working class families, with a good many of the burials children.

The cemetery operated from 1832 to about 1868, or at least, these are the earliest and latest burial records that were found for the cemetery. William T. McNeely eventually bought out the interests in the property from the original founders in the early 1850s. The cemetery plot and some of the surrounding lands remained in the McNeely family’s hands until the beginning decades of the 20th Century, when it was sold off and developed. Records are inconclusive as to what happened to the possible 10,000 bodies that were buried at the cemetery. A record for 200 removals "more or less" in 1914 (Philadelphia Board of Health Meeting Minutes) is the only record found for removals, thus it is likely that the rest were simply left there or removed without recording.

The Mutual Burial Ground of Kensington today appears to lie sealed under the buildings at 1834-1846 Frankford Avenue as well as under part of the 1800 block of Blair Street and parts of the City of Philadelphia’s Kensington Recreation Center (a.k.a. Shissler Recreation Center) addressed at 1800-1856 Blair Street. Little is known about how the Mutual Burial Ground of Kensington may have been laid out or landscaped, as no individual maps of the cemetery, illustrations, or photographs have yet been located. However, the burial ground has consistently been surveyed and included in almost every 19th Century and early 20th Century atlas for the city of Philadelphia between the years 1849 to 1922.

By 1922 the western portion of the cemetery lay beneath the Kensington Recreation Center; as well, the eastern half had the 1800 block of Blair Street built over it. Soon after this, sometime between 1923 and 1929, the structures at 1834-1846 Frankford Avenue were also built over the eastern part of the cemetery.