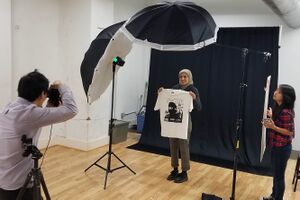 Art and activism at the Philadelphia Asian American Film Festival.

Showcasing and Celebrating the Best Films By and About Asian Americans

Philadelphia Asian American Film & Filmmakers was founded in 2008 by a passionate group of Asian Americans who felt a need for a festival space that was focused on supporting the growing Asian filmmaking community. The Philadelphia Asian American Film Festival (PAAFF) is the showcase event of this non-profit organization and is dedicated to supporting and highlighting the experiences of Asian and Pacific Islander diaspora through creative community-focused programs. PAAFF is currently the third-largest film festival of its kind in the United States. In addition to our film programs, our volunteer-run organization also presents supporting programming such as live performances, chef demonstrations, panels and lectures, and educational workshops during the festival and throughout the year.

Note:  The above descriptive information came from the organization's What Is PAAFF? page.