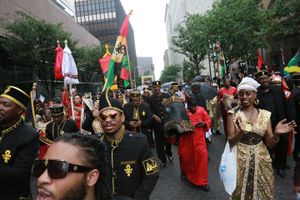 Juneteenth is the oldest celebration commemorating the ending of slavery in the United States. It was on June 19th, 1865 (two and a half years after the Emancipation Proclamation was in effect) that the Union soldiers landed at Galveston, Texas with news that the war had ended and that the enslaved were now free. The celebration carries the an example of a thesis statement police brutality research questions connotation that until we’re all free, none of us are free.

"Juneteenth is an event that has a unique cultural and historical significance, both here in Philadelphia and across the country. The City is proud to partner with the Philadelphia Juneteenth Parade and Festival," said Mayor James F. Kenney.

Note:  The above description came from the event's About Juneteenth page.