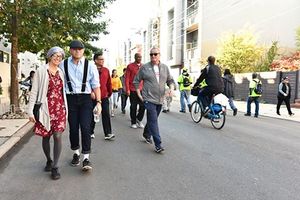 Come out & play on car-free streets!

People can walk the dog, ride the bike or go for a jog but they can't drive on a 3.5-mile stretch of Philadelphia streets during the annual Philly Free Streets event. If you want to get some fresh, fall air, look no further than taking a walk on streets from Old City to North Philadelphia.

Philly Free Streets temporarily closes roads in the city, encouraging people to walk, run, bike and play safely. The annual event is inspired by the open streets that organically sprouted up during the papal visit in 2015, when scores of city streets were closed for security reasons. The first Philly Free Streets event brought some 30,000 people onto South Street, the Schuylkill River Trail, MLK Drive and West Fairmount Park in September 2016. Each year, city officials plan to move the event to a different portion of the city.

Note:  The above descriptive information came from NBC-10 and Philly Voice.