This Is an Uprising - Mark Engler 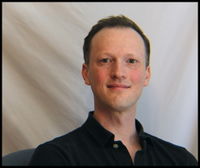 Mark Engler is an author and journalist based in Philadelphia. His new book, This Is an Uprising: How Nonviolent Revolt Is Shaping the Twenty-First Century, written with Paul Engler, has just been released by Nation Books. Mark is an editorial board member at Dissent, a contributing editor at Yes! Magazine, and a senior analyst with Foreign Policy In Focus, a network of foreign policy experts. Additionally, Mark serves as a monthly columnist for the Oxford, UK-based New Internationalist magazine. An archive of his work is available at DemocracyUprising.com.

Mark’s first book, How to Rule the World: The Coming Battle Over the Global Economy (Nation Books), was praised by Greg Grandin as “an essential handbook not for the few who do rule the world but for the many who should.” This Is an Uprising has been lauded as “a landmark book” (Bill McKibben), “a genuine gift to social movements everywhere” (Naomi Klein), and “a true masterpiece on the history, logic, ethics, and power of nonviolent action” (Erica Chenoweth).