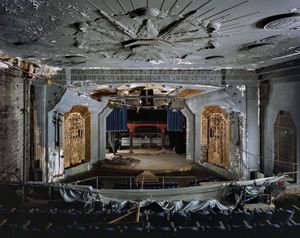 Interior of the Uptown Theater, the first project of the Uptown Entertainment and Development Corporation, in the process of renovation.

The Uptown Entertainment & Development Corp. (UEDC) is a community development corporation, incorporated as a nonprofit organization in 1995, received its 501c3 tax-exempt status in 2002, and registered with Pennsylvania Bureau of Charitable Organizations since 2004. UEDC has identified the historic Uptown Theater, listed on the National Register of Historic Places, as its first acquisition and revitalization project. Development plans include renovating the theater as an entertainment venue, creating a museum dedicated to preserving Black music, developing a technology center, and providing commercial leasing space in the proposed Entertainment and Education Tower. Other UEDC projects / programs include:

On Dec 22, 2011 the Uptown Entertainment and Development Corporation held a ceremony to light up the famous marquee above the famous historic Uptown Theatre in North Philadelphia. Filmed by Monica Peters