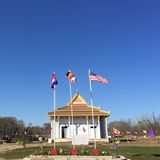 In 2013, ... there were plans drawn for a monastery to be built, but construction had yet to start. In the years since, the temple has been slowly pieced together, relying on donations from the Cambodian community, keeping to traditional Khmer architecture. The result so far is something quite stunning. Wat Khmer Palelai, located at 2701 S. 58th Street, has a multi-tiered roof covered in curved tile and bright golden molding running the course of the roofline. Figural sculptures of Apsara, the female spirit of the clouds and water in Buddhist mythology, are perched atop the columns that line the porch. Decorative tiles are being placed on the exterior walls, and large cobra snake sculptures representing Nāga, a protector of treasure often associated with bodies of water, stand guard at the bottom of the temple’s stairs....

"This temple is a public place, it belongs to Cambodians, but not just Cambodians, it's for any national who believes in Buddhism," said [resident monk] Master Han-Hea.