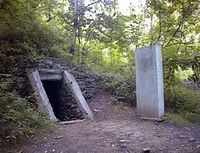 The Wissahickon Hermit Cave, also known as the Cave of Kelpius.

The Wissahickon Hermit Cave (AKA Cave of Kelpius) is described as follows:

The Wissahickon Hermit Cave, also known as the Cave of Kelpius, is a small, man-made cave located on a hillside in a wooded area of Wissahickon Valley Park. It was built and utilized by the followers of Johannes Kelpius, a hermit and religious mystic of the Rosicrucian order who immigrated to the area from Germany in the late seventeenth century in order to await the end of the world.

While the cave is locally well-known and accessible to the public, it is located in a secluded area of the park and can prove difficult to locate. The easiest way to find the cave is to access the park at the Hermit Lane entrance in Roxborough. Enter the park and bear right immediately where the gravel path splits in two directions along the ridge. Follow the path through a gate until you reach a clearing containing a little league baseball field. Behind the left field foul pole is a trailhead leading back into the woods. Follow this trail, bearing left wherever possible to follow the line of the ridge. Within a few hundred feet, you will see the cave on your left, a few feet up on the hillside.