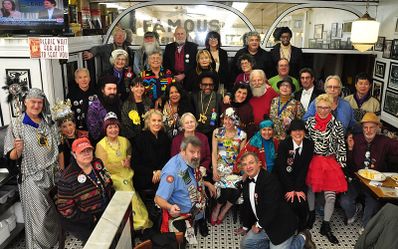 Dumpster Divers of Philadelphia in 2015. 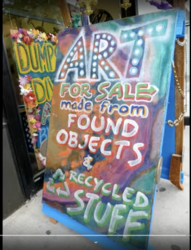 It started on April Fool’s Day, 1992, when a handful of found-object artists gathered at a local diner. It’s blossomed into a coalition of 40 “creative re-use” artists who socialize, plan shows, and exchange found treasures like lamp parts and appliances, broken jewelry and sports equipment – the fodder for their witty artworks. They’re the Philadelphia Dumpster Divers, and they have a sweet, chaotic energy all their own.

They have only one unbreakable rule: “you can’t end a meeting until you decide where the next one will be held,” but plenty of maxims. There’s the time-tested “Rule of a Hundred” which, according to co-founder Neil Benson, holds that “something you would not take one of, you will take 100 of”. (Think pencils, buttons and bottle caps.)

And there’s sage trash-picking advice: If you kick a trash bag and it’s soft, move on. Never dive into a dumpster if you can’t get out. (And, yes, it is rarely necessary to actually climb in.) And most important: Always leave a trash site neater than you found it.

The Divers’ art has been documented in dozens of exhibits, on the Internet and in books like Found Object Art (2 volumes) by Schiffer Publishing.

The message behind the fun? That the richest society in history needs to find a more sustainable way to use (and reuse) its dwindling resources. To quote Neil Benson, “Trash is simply a failure of imagination.”