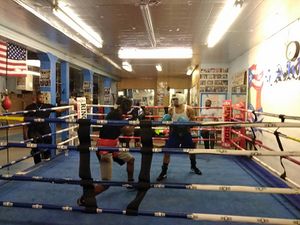 A two-story brick building at 1920 East Venango Street in the Harrowgate neighborhood of Philadelphia stands as a reminder of the city’s rich boxing history. Harrowgate Boxing Club was founded in 1972 by John Gallagher and Charlie Sgrillo.

Over the years, a number of professional boxers trained at Harrowgate. Brian McGinley and Anthony Boyle were two of many Irish American boxers from Philadelphia who called the gym home during the 1980s and 1990s. Professional boxer Danny Garcia, a Puerto Rican fighter from Juniata Park, stands as a symbol of the demographic changes that occurred in the neighborhoods surrounding Harrowgate Boxing Club in the late 1900s.

In recent years, Gallagher and Sgrillo have supported the preservation of Philadelphia boxing history. Harrowgate Boxing Club, now a nonprofit organization, supported fundraising efforts in the 2000s to erect a statue of Philadelphia fighter Joey Giardello in the East Passyunk neighborhood that Giardello called home.

Harrowgate Boxing Club’s most important role is the one it plays in the local community. The club not only serves as a place for neighborhood kids to train in boxing, but also as a refuge for them from the hazards of the streets.

Note:  The above descriptive information came from PhilaPlace.