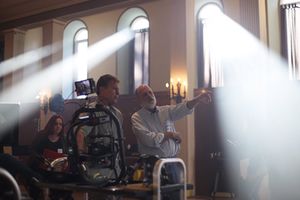 History Making Productions at work on a film.

History Making Productions is a full-service film and video production studio located in Philadelphia best known for provocative character-driven history documentaries, original music, and groundbreaking scholarship. HMP has received more than two dozen Emmy Awards for its inclusive and democratic approach to history and current events. The studio was formed in 2008 by civic leader Sam Katz and his son Philip Katz, who sought to make fast-paced, visually stimulating films for the digital age. Since then, the studio has produced over 200 films and videos on subjects ranging from architecture, baseball, and civil rights to philanthropy, religion, and science.

Note:  The above descriptive information came from the company's About page. The tagline came from its Twitter profile.

I'm a life-long Philadelphian. But I learned far more than I've ever known about William Penn and the founding of our City from their Videos. ~Stan (talk) 11:16, 1 July 2017 (EDT)