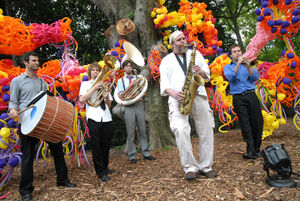 With a line-up of Philadelphia musicians whose influences range from Sun Ra to Bulgarian brass bands, West Philadelphia Orchestra is a unique live ensemble in today’s auto-tuned musical world. They began playing Romanian ballads, Macedonian folk-dance songs, Bulgarian wedding music, and Klezmer in late 2006, and have continued expanding their repertoire of Eastern European music. The band also plays original tunes which blend other sounds, like jazz and classical, together with traditional Balkan sounds. As much a community as a band, WPO’s performances are celebratory events. With blistering beats and walls of brass, they inspire audiences to hold hands, gyrate, howl, and otherwise slip the yoke of the homogenized culture industry.

Note:  The above descriptive information came from the organization's About WPO page.