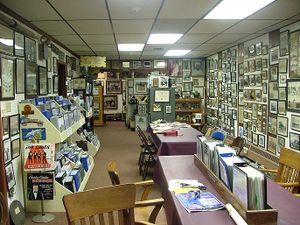 A view inside one of the rooms of the George F. Boyer Museum. Against the left wall are dozens of binders full of documents and photos, which by themselves would give a visitor a fascinating full day.

George F. Boyer was born in Philadelphia in 1904. He came to Wildwood around 1932 and earned his living as a butcher, a merchant, and a fireman. His real local fame, however, came from his role as the City of Wildwood’s first and only official historian. While serving with Wildwood fire department in 1959, he came across the stump of a tree (now known as the "W" tree) in the old city hall.

Running down the origin of the tree, sparked a tsunami of information as he talked to local residents and researched and collected old records. One thing led to another, and in January of 1962, Boyer was appointed to the city’s newly established historical commission and became the first president of the Wildwood Historical Society.

Tireless in his efforts to collect and preserve local artifacts, Boyer spoke to school and church groups as well as civic organizations, urging them to "act now ... to gather those irreplaceable links with the past and preserve them for generations to come." Founded by Boyer, Wildwood's first historical museum opened in 1963, on the 2nd floor of the Municipal Building. In October 1976, the City of Wildwood honored Boyer for his "long and devoted service" by renaming the museum, the George F. Boyer Historical Museum. He passed away a month later, but his legacy lives on. The museum, now located at 3907 Pacific Avenue, continues to welcome visitors and locals alike, just as it did a half-century ago under Boyer's care.

Note:  The above descriptive information came from the museum's home page and its About page.

In my view, this and the Hereford Inlet Lighthouse are the two Wildwood essentials. The museum is absolutely packed with artifacts and documents. In addition to its being a fascinating experience unto itself, a museum visit will also give you lots of other ideas about what to do while in town. One of the other great historic buildings that I recommend in Wildwood is the Boardwalk Chapel (BWC). ~Paul