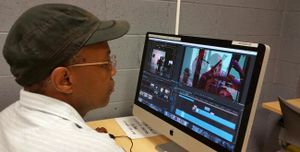 Scribe Video Center was founded in 1982 as a place where emerging and experienced media artists could gain access to the tools and knowledge of video making and work together in a supportive environment. Scribe provides training in all aspects of film, video and audio production. We also offer classes in computer-based interactive media to individuals and community organizations as well. We give emerging and mid-level video makers the skills and opportunity to use video and film as tools for self-expression and for representing and supporting their communities. In the three decades since its inception, Scribe has established eight ongoing programs designed to meet the needs of the general public and media artists: